The Birth of Bliss Adventure

How It All Started

– Snakes, snakes, watch out guys! Save yourselves!

A sudden yell deep in the jungles of Borneo was followed by loud splashing noises. Beams of headlamps bounced wildly up and down in the surrounding rainforest as the nocturnal team rushed out from the brown-coloured water.

Two local Dayak tribes men and four Finnish guys nodded their heads with serious faces. Their hearts were racing. That was a close one!

Two lethally poisonous water snakes had launched an attack. They obviously did not appreciate the group wading up the side river at night, catching the sleeping fish with their Parangs, the traditional jungle knives.

After a short silence a laughter of relief bursted out.

– Ha ha, you should have seen yourselves! You screamed and jumped like a little child seeing a big spider!

– Looks who’s talking, your speed to flee the river would put any world-class sprinter in shame, ha ha!

Sensation of relief ran through the adventurers. Also the troubled snakes seemed to have put the incident behind as they disappeared in their hideouts.

Among the laughing jungle hillbillies were Artturi Kröger and Mikael ”Mike” Backman, friends and beyond to be. They had met just on this expedition exploring one of the wilder corners of the Planet . They knew already that they got along great and that there could be more adventures to follow. How ever they did not know yet that one of those ventures would be founding together a few years later Bliss Adventure in Finland, Lapland.

After the Bornean expedition led by Pata Degerman, Artturi and Mike returned to Finland as changed men. The rainforest and the people involved on the trip had impressed both of them thoroughly. There was no way of returning the earlier urban lifestyle.

The guys joined Survival Guild of Finland in order to learn more about the nature and traditions of their native habitat. They were hungry for gaining skills and knowledge how to get along in the wild in the often harsh Arctic. Less poisonous snakes for sure, but equally well less edible plants.

Artturi pushed further also his climbing and instructing skills by spending more and more time in the mountains and in Alpine environment, learning from seasoned professionals.

Soon they discovered a shared passion for finding a stronghold for the future adventures, and simply a base camp for a good life. This meant a lot of wilderness and a reasonable amount of people only – and fair opportunities for creating a livelihood from the outdoors. Compass was pointing north. 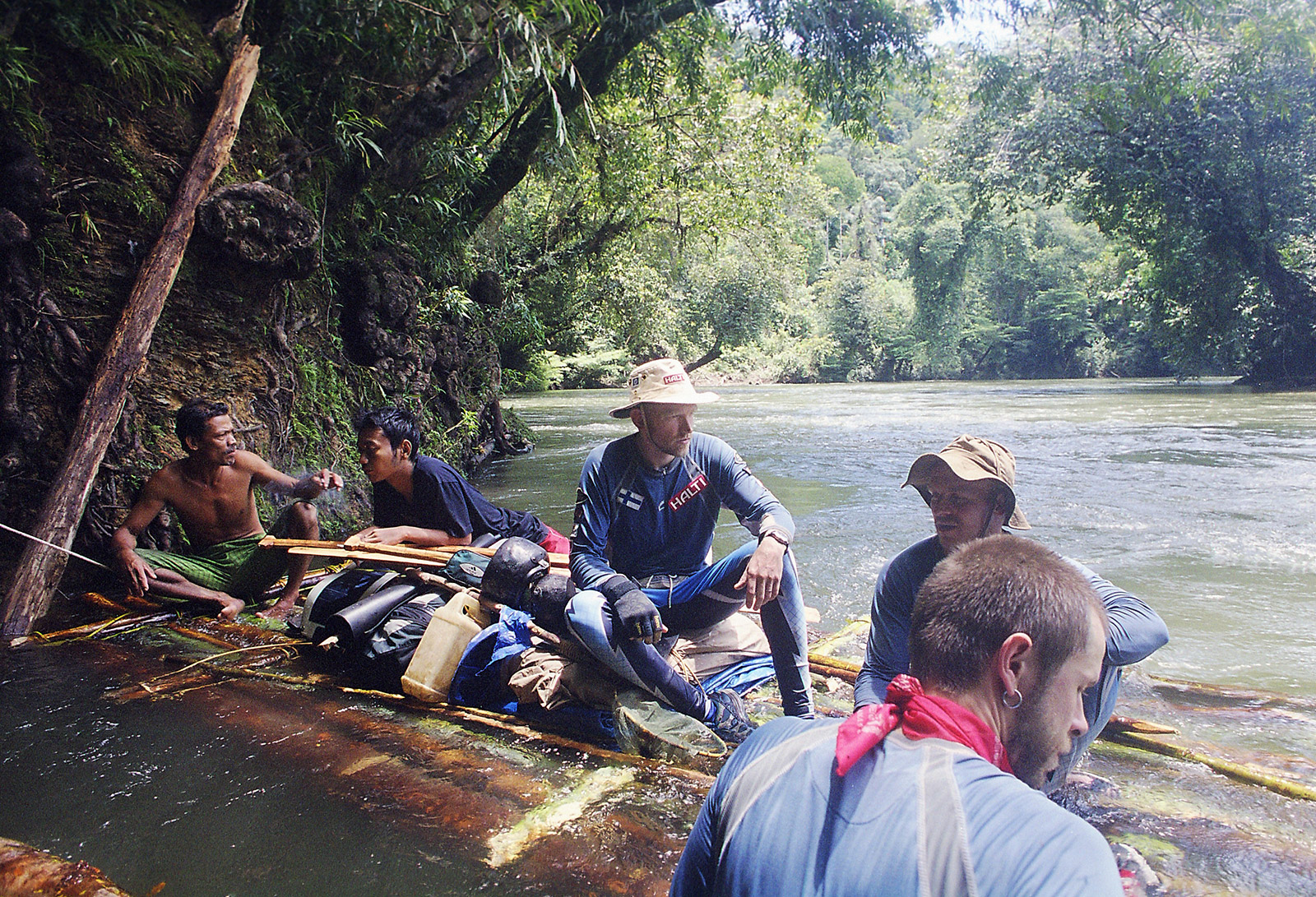 Short break by the Bornean river. 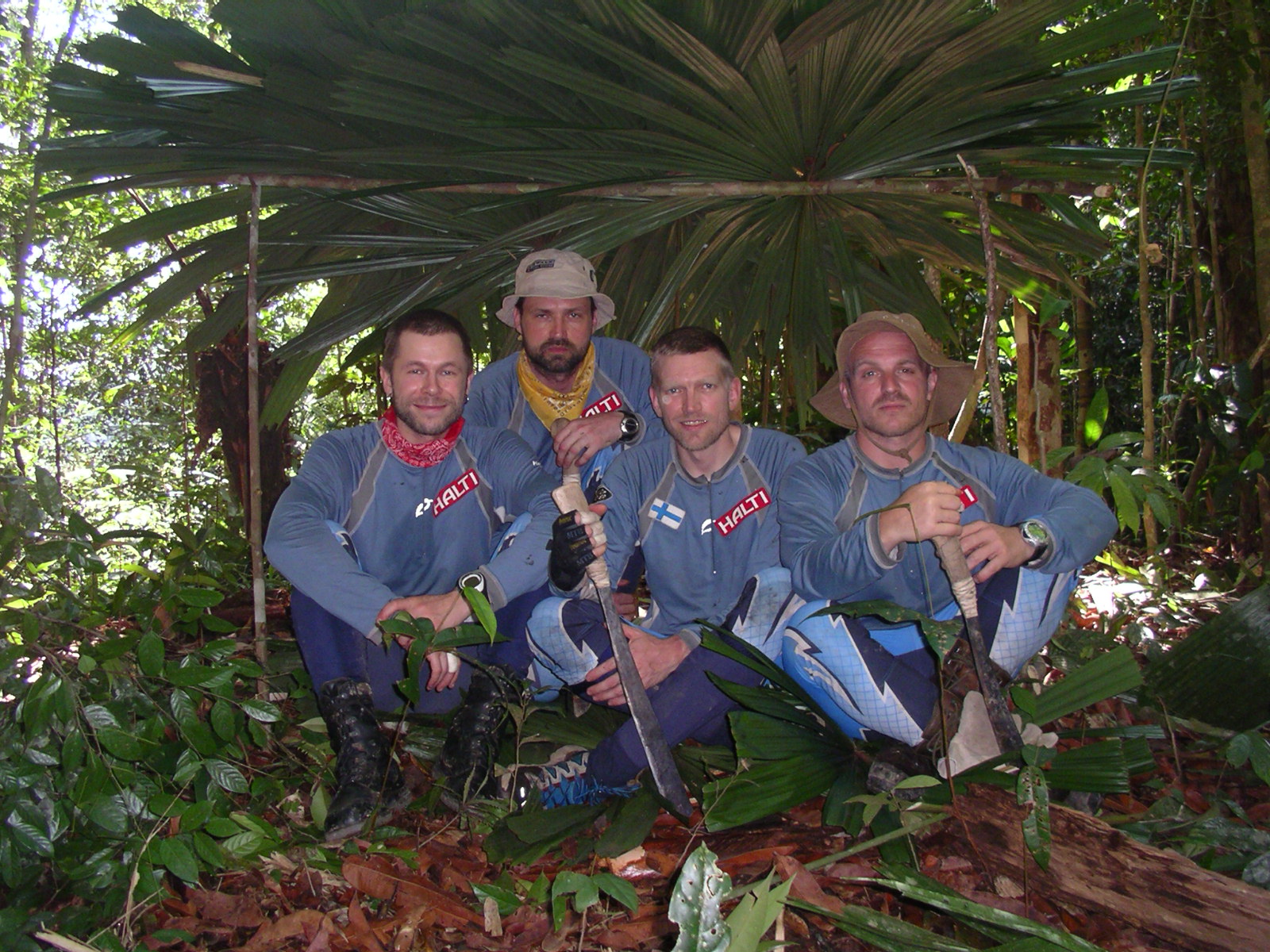 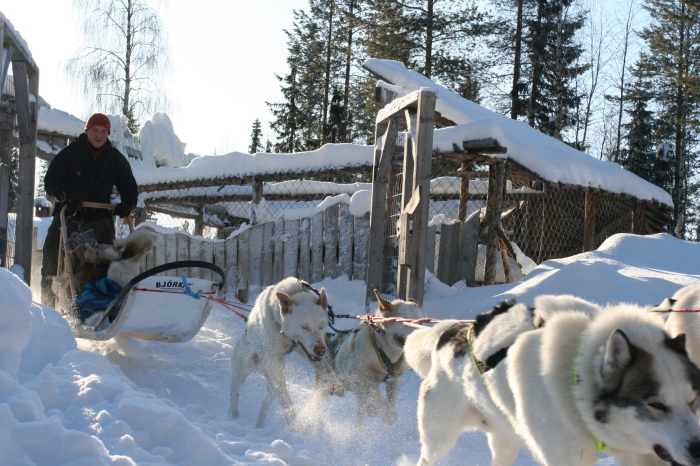 Overly excited huskies and the dog-sledding guide Mike at the Arctic Husky Farm.

The Hairy Call of the Lapland

The stepping stone to the Arctic lifestyle was nothing less than an invitation for working with arguably the finest of the creatures: the huskies! Artturi and Mike became dog-sledding guides at the Arctic Husky Farm, a well-run place located between Pyhä and Luosto in Eastern Lapland, some 135 kms north-east from Rovaniemi, the capitol of Lapland and the closest airport, too.

Work of a dog-sledding guide and care-taker through the below freezing winters was tough yet highly rewarding. The dogs were incredible and absolutely wonderful co-workers, leaving the guys very thankful.

The region started to feel like home. Artturi and Mike were getting eager to launch something new to make Pyhä–Luosto even more appealing and versatile for the guest and partners. After recognising the vast ice climbing potential of Tajukangas’s ancient rock formations in Pyhä, the rest was history: Bliss Adventure was founded.

This sadly meant less and less time spent with the huskies, but the guys did return regularly to the farm to pet their hairy buddies. However, the early stage of Bliss Adventure was to be more and more focused for developing safe ice climbing services both in Pyhä and in Korouoma Canyon, Posio.

Bliss Adventure team has grown in fourteen years from the founding duo to a team of several hardworking guides serving clients from absolutely all over the Globe. The future of Arctic adventure looks bright as pristine snow. Do join!

Manage Cookie Consent
Our website uses cookies to improve your experience. We'll assume you're ok with this, but you can opt-out if you wish. More information:
Manage options Manage services Manage vendors Read more about these purposes
Preferences
{title} {title} {title}